Friendship is your home away from home | Dui & Ajanta

There’s something very special about old friendships. Those memories created and shared, the individual growth you go through but always knowing each other are near, and the time spent a part only to rekindle and take off exactly where you left, like there wasn’t a day in between.

That’s what it has been like for Dui and Ajanta, which thanks to the last year and changes we’ve all had to make in our lives, brought Ajanta back to the coast and their friendship to reunite, stronger the ever.

Dui met Ajanta in 1998 at Eumundi Markets, when she had returned from India for a few months back in Australia to make some money and head back again. The universe had decided to put there stalls at Eumundi Markets next to each other, at the time Dui was selling Saris and clothing she had designed out of them, and Ajanta was selling silver jewelry from India and pieces she also made with semi-precious stones. Both being the vibrant happy souls they are, it was friendship at first sight.

A year later, sometime in 1999, Ajanta was travelling around India and had just returned to Delhi after a few weeks exploring the Himachal Pradesh area, and the village of Manali. It was then, by chance, as she was walking down a street in the Paharganj district of Delhi, she spotted a familiar face. Even though she knew Dui was always in India, the girls had not planned to meet up or even knew either would be in Delhi at that time. Thanks universe! So, from there, they embarked on a Rajasthan adventure together for a couple weeks before parting ways and Ajanta heading south.

We thought it would be fun to sit down with them 22 years later and look at a few photos taken from that trip… back when there were no digital cameras so what you snapped, is what you got.

Sold out
Sold out 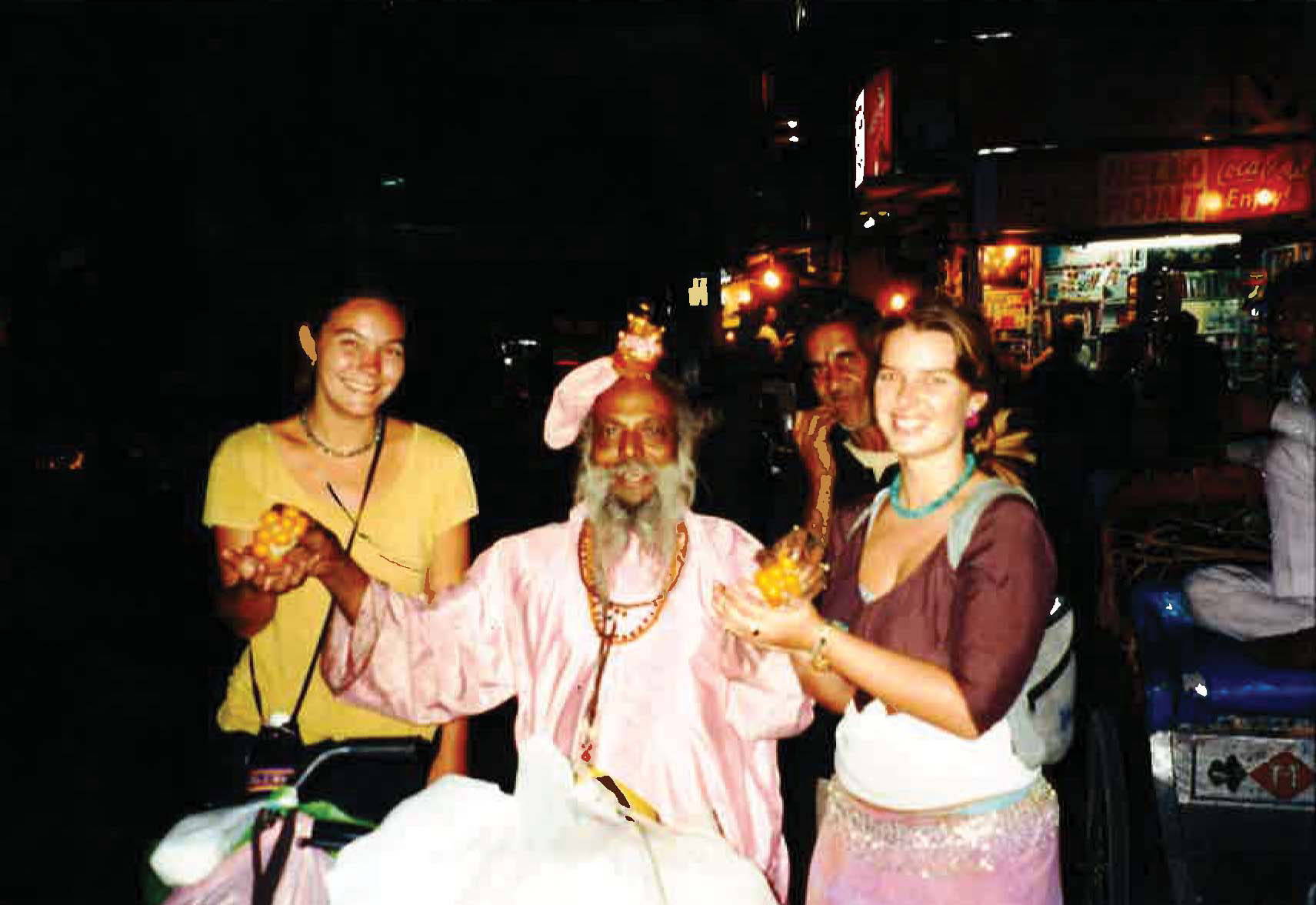 “This photo must have been taken either the day we ran into each other, or the following one, in a street in the Paharganj.

I remember this Baba was so sweet and cheeky that we both fell in love with him instantly and he gifted us a bunch each of yellow Indian plums. There are many different kinds of Babas, or Holy Men, in India who have devoted their lives to spirituality, and chosen to live an ascetic life. Most have given up affiliation with their caste and kin and have undergone a funeral ceremony for themselves, followed by a ritual rebirth into their new ascetic life. They come from all walks of life, and they wear ocher robes, or perhaps no clothing at all, to daub their skin with holy ash, to pray and meditate, and to wander from place to place, depending on the charity of others. Seeing them all around India is another thing that makes this place so unique.” 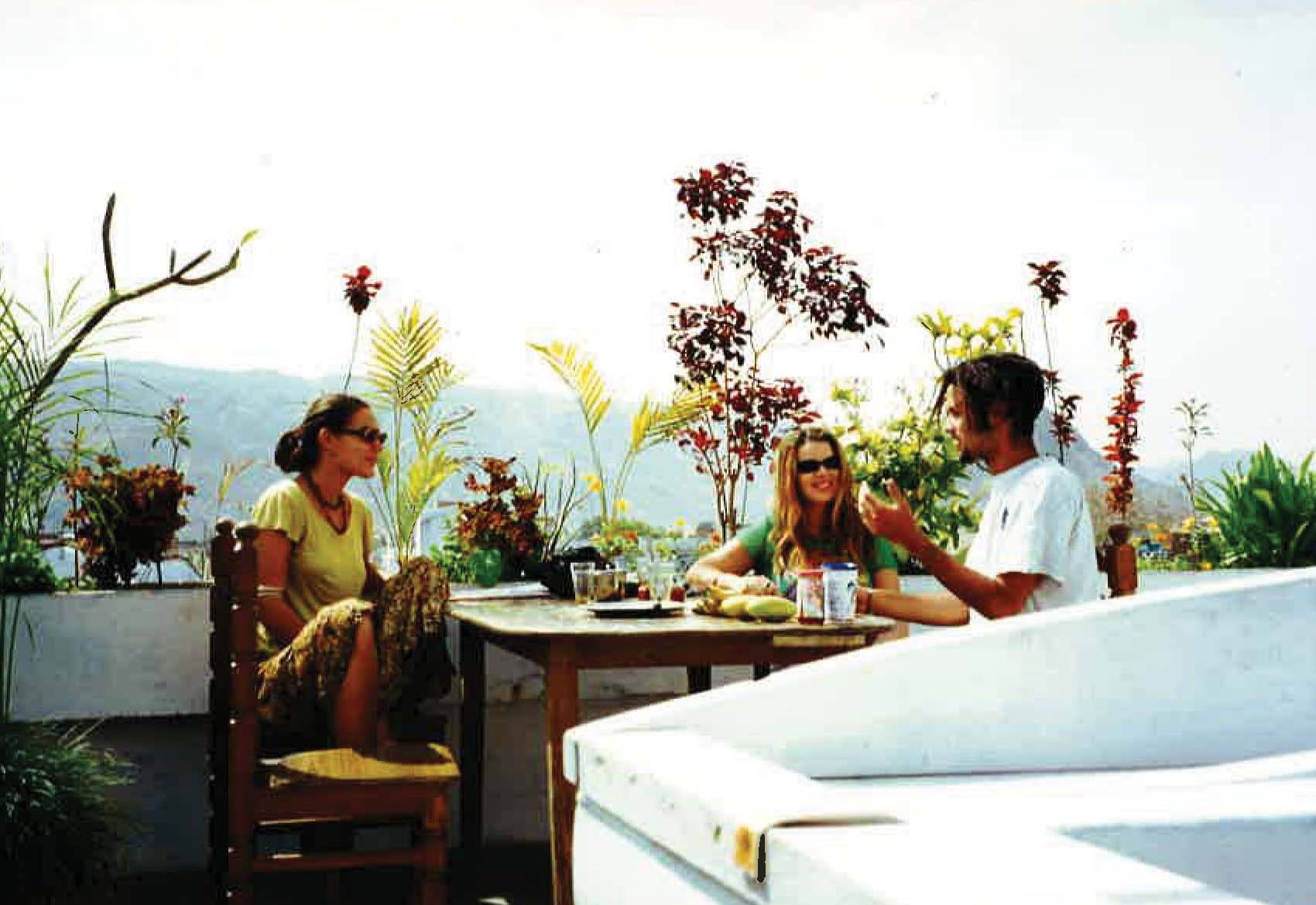 “This photo was taken the morning after we arrived in Pushkar and were having breakfast with a fellow backpacker at our accommodation. Ajanta had never been to Pushkar before, so I was very excited to take her to the place I call my home and that’s so dear to my heart. Being on a rooftop is such great place to get an overall idea of the layout of a place, plus with that beautiful morning sun, and the heat not quite kicking in yet, it’s the best way to start the day. We had such a fun time in Pushkar together. Ajanta was doing a silversmithing course whilst I was saving a cow. It’s a long story!” 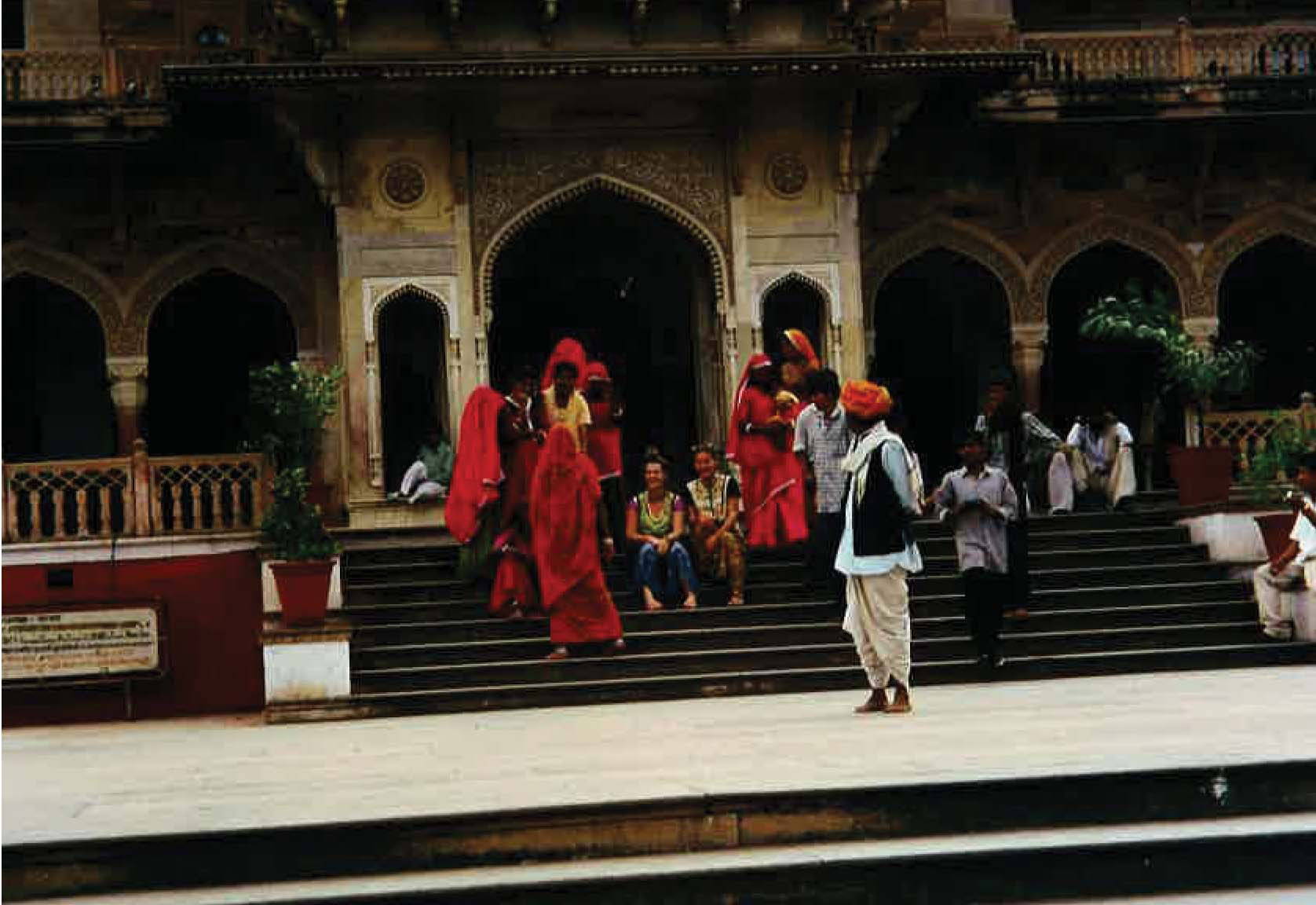 “This photo was taken on the steps outside the Albert Hall Museum in Jaipur, Rajasthan, where we stayed for a few days while on our way to Pushkar. In this photo Ajanta and I are surrounded by families of villagers who have come in for the day, dressed in their beautifully bright coloured saris and vibrant orange turbans. This is a part of India that makes my soul sing. Colour!!!” 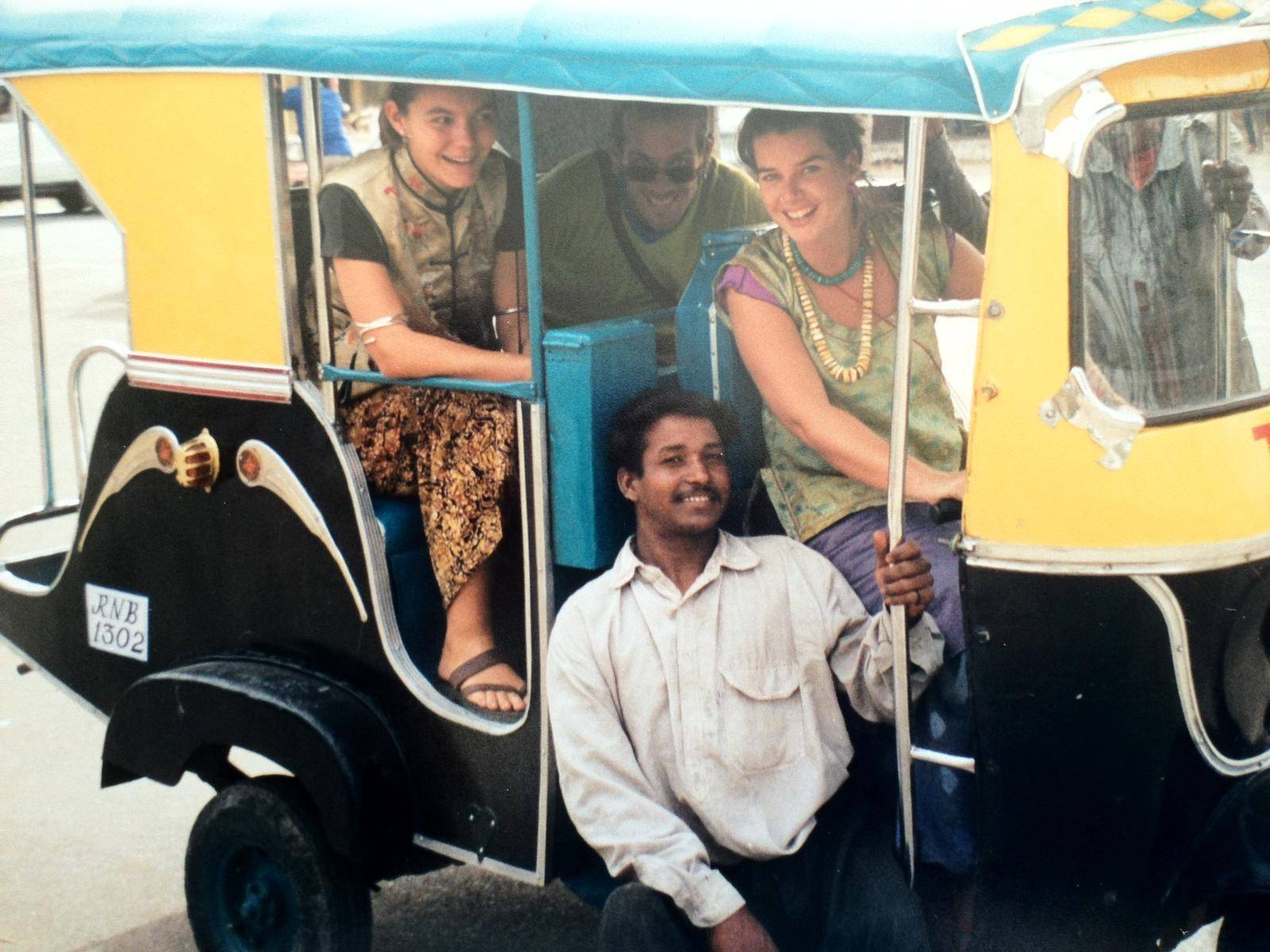 “I think I may have pushed the driver out of his seat for this photo, and maybe even asked to drive the rickshaw. I’m not exactly sure where this photo was taken but it was either in Delhi or Jaipur (I’m thinking Delhi). Rickshaws were first invented in France in the late 17th century and started appearing in India in the late 19th century. Rickshaws are now everywhere in India and range from pulled (where the cart is pulled by a human runner) to cycle and auto rickshaws, which now there’s even the introduction of electric rickshaws. They’re lots of fun to get around in, and with population being so high, the smaller the vehicle the better! ”

“After leaving Dui in Pushkar I slowly ventured south towards Mumbai, and of course, I had to make a stop at the Ajanta Caves in the Aurangabad district. This is where my dad got my name from back when he was travelling India in early-mid 1970s, and it’s always been on my list of somewhere I MUST visit. My vision of how these ‘caves’ would look to what I actually got to experience, was unbelievable. The Ajanta Caves are a approximately 30 rock cut Buddhist monuments dating from 2nd century BC, and feature incredible sculptures, paintings, shrines and even sleeping quarters for the monks. The Ajanta Caves are universally regarded as masterpieces of Buddhist religious art and have been listed on UNESCO since the 1980s. I must admit, I felt pretty special when I was there, being in the presence of such grand and raw beauty, knowing this is where my name came from. Thanks dad!”

When Australia opens up for travel again, I wonder where the girls might meet up next?

“Friendship is your home away from home, your warm cup of sweet coffee, friendship is that twilight glow at sunrise and sunset making everything seem exciting and possible.”