Play is an essential tool for the imagination

There’s certain people in the world that just shine bright. From the moment you meet them (and sometimes it’s only for a few minutes) you know they hold a special something within them. Dani Cabs is one of those people and after hearing him speak a few years ago at Creative Mornings Brisbane, his words about the 'importance of play' stuck with me, so I wanted to talk with him further… and introduce you all to him too ❤️

Firstly, can you please tell the Boom community a little about yourself?

I'm Dani Cabs, a professional clown, theatre maker, actor, emcee and photographer. I found the arts in my late twenties after trying many different career paths, professional sports, fitness, retail, tourism to name a few. Something that I found was always consistent within those careers was my ability to connect with people, mainly by being open and playful. I believe we all have the capacity to get along in some way, we just have forgotten how because we have been told to stop playing with each other as we reach adulthood.....forgetting that it's through play that we learn and evolve.

You’re a comedian, actor, photographer and an extremely creative person in the performance art sector… What originally inspired you to get into the field of performance?

I was practicing as a photographic artist around 2008 - 2014, playing with how the camera constructs identities. I kept on using myself in front of the lens, creating different, in different situations (The Artist, Performer, Teacher). Receiving some positive feedback from audiences, increased my confidence in purposefully performing for an audience. That and a few synchronistic situations lead me to discover live theatrical clowning in 2014/15. Once I learnt about Clowning as an art form I realised I had been The Clown my whole life and that The Clown was a crucial part of society.

Is there a particular performer you really admire the work of?

There are heaps of performers I admire. Some peers on the festival circuit that keep me on my toes, Barnie Duncan, Josh Glanc, Zack Zucker, Tom Walker, Josh Ladgrove to name a few. They are all excellent clowns making content at prolific levels. The Aunty Donna boys are on another level with their own show on Netflix. Dr Brown (whom I've trained under) is a genius, he directed Natalie Palamides' show on Netflix called Nate, a must watch for all. Lucy Hopkins and Spencer Jones from the UK are also masters in clowning, able to get audiences to do whatever they want with complete innocence. And finally the late George Carl - do yourself a favour and watch a youtube clip of him do his thing back in the 80's. Wow!

I assume one day you made the decision to take the plunge from “your day job” into (full time) performance and art. What inspired you to do this?

I was lecturing in a diploma of photography at a private college in Brisbane for four years while I made the transition to performance. I had a taste of doing the odd show and MC-ing at a couple of small festivals but because of being stuck to our trimester schedule at the college I could never go on a proper tour. I felt that to really learn the craft I had to throw myself into it fully, so I saved a little money, quit my job and became a carnie touring two different shows over a couple of years around Australia. I don't think there was a decision to make, the decision made itself, I just had to go along for the ride.

I’ve seen you perform as a few different characters over the years, could you please tell us a little about the process you go through of firstly coming up with the idea of a new character, and then executing their personality and a show?

The characters usually are born from seeing absurd situations in everyday life, and as a generic white man, not being able to have a voice in those situations. So I think to myself, "who needs to be heard here?" and I create a character to fit that. They are always an extension of me, who I would be in those situations, if things were just a little bit different. If I see old people needing a voice I turn into Maria, if the Westy Bogan is copping crap I become "Duido, like Guido but with a D". Having heard the stories of female partners and family members that work in the business/corporate sector made me create "Dee" who doesn't take sexual harassment in the workplace lightly. By adapting my character for these different situations I'm able to comment vehemently about issues within them - always playfully of course. Executing them in shows is just about following their values, with their specific character framework (accent, voice, costume), and since they are a part of me they all share my values of play, connection, compassion, community and love. 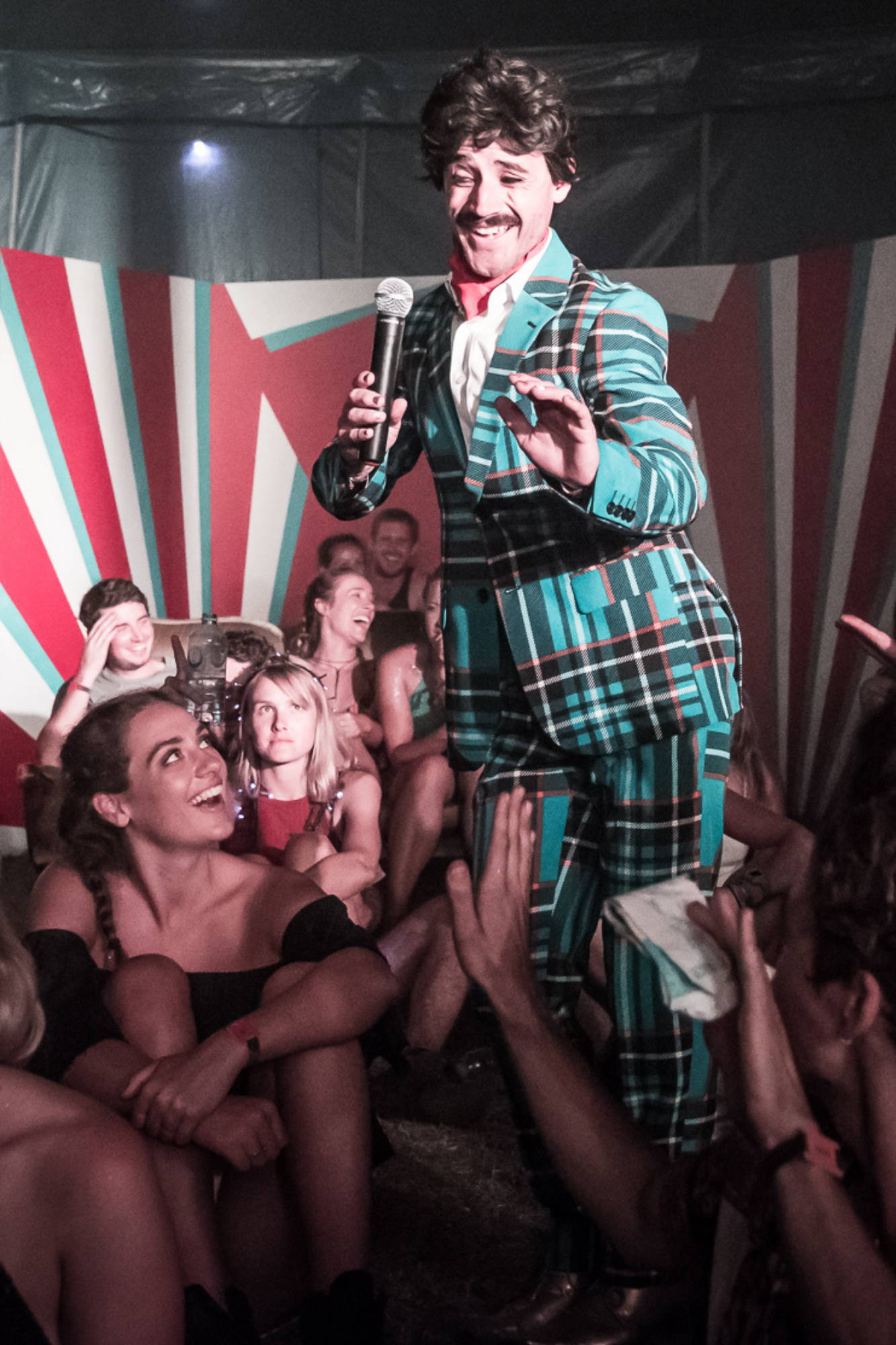 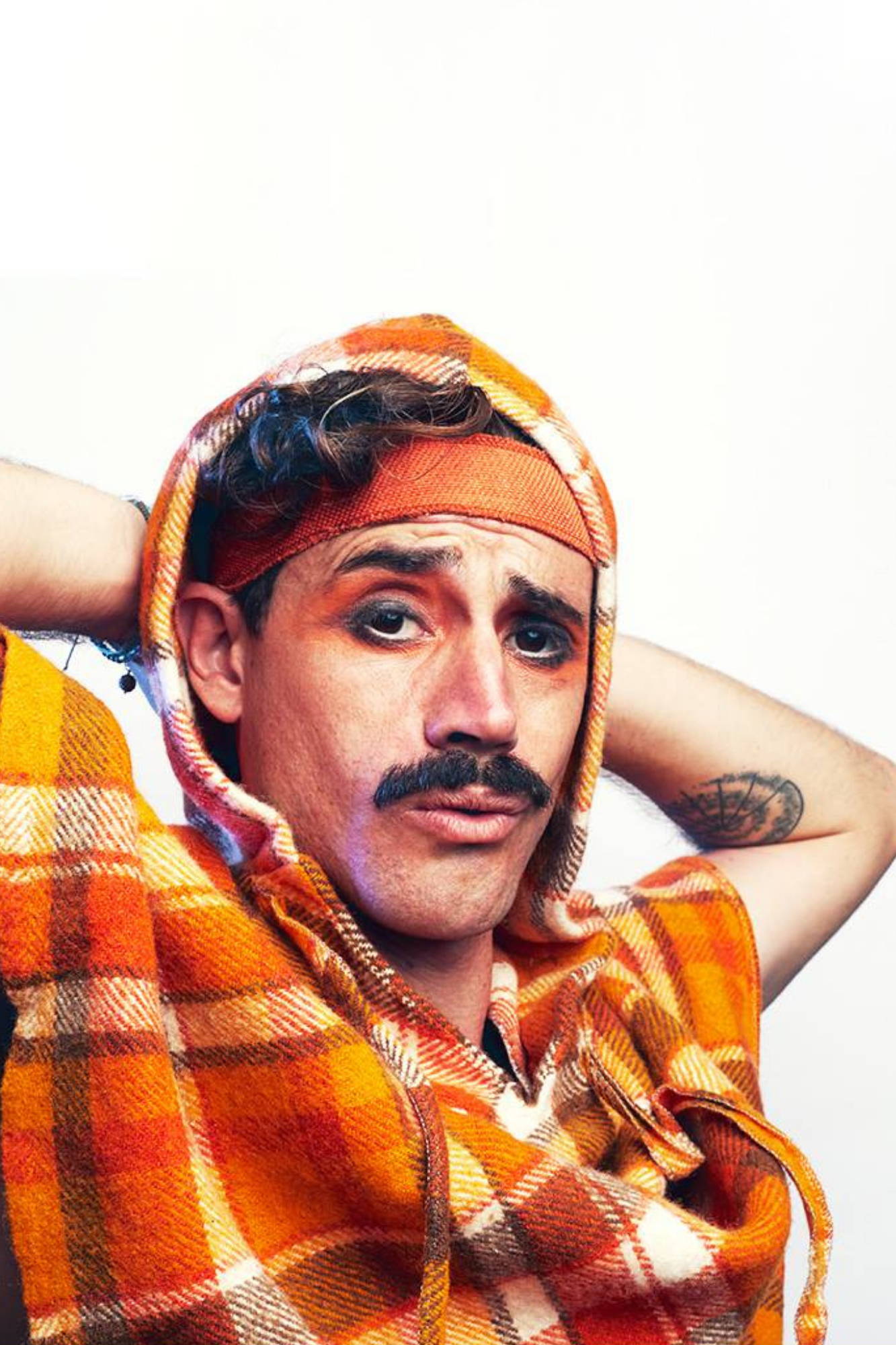 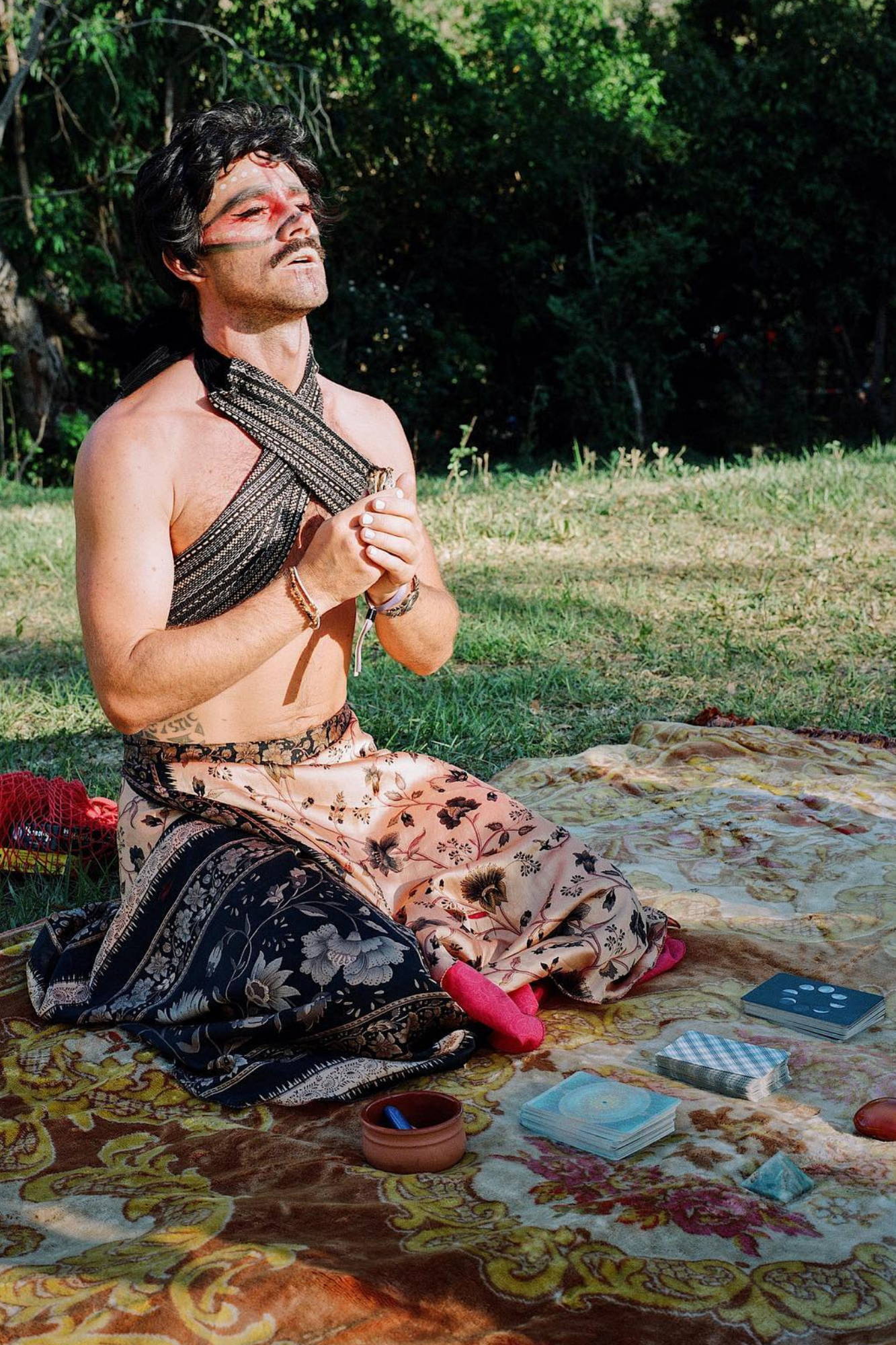 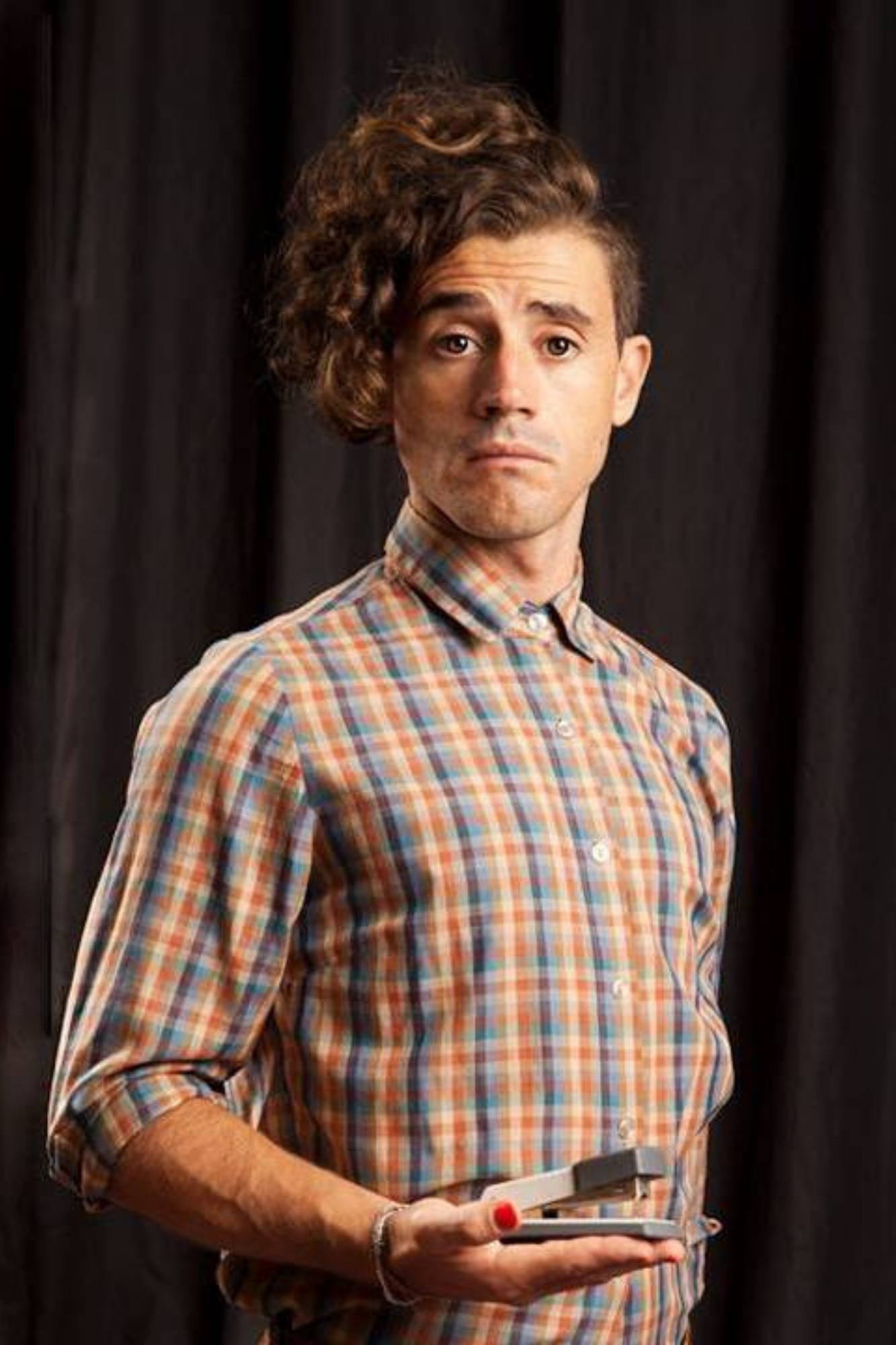 Is there anything you’re working on at the moment you’d like to tell us about?

I just finished the first development and showing of a new show with Hoopla Clique and Cluster Arts. The show is called The Secret Ingredient. It's a clown show for families where I play the Chef, Julian plays the Dish Pig and we have issues with a mouse. It's still a bit fresh and needs more work but has the foundation of a very funny, physical and absurd show. So keep an eye out for it to see how it develops in the coming months.

I've also recently become a licensed Kahuna Bodyworker so I'm using my ability to connect intuitively to people, to share love and connection in one-on-one sessions. I work out of a home studio on the Gold Coast so if anyone is down that way and wants an incredible Kahuna session, my number is 0415 404 608. Seriously!

I heard you speak at a ‘Creative Mornings Brisbane’ event a couple years ago, and your talk was about the act of play and how important it is for us in life. Can you please tell us a little about that and what made you choose the topic of play to talk about?

I've always been interested in play, I guess because I've always been playful. So when CM gave me the topic of "Inclusive" I thought instantly what could be more inclusive than play? Nothing! We learn how to read each other, how to communicate, express ourselves, build communities and friendships all through play. I feel we could save a lot of the world's problems if we remind ourselves about the importance of play, how it created our societies, how it precedes us, how if we stop playing we forget how to connect. So yeah, PLAY is IMPORTANT!

After your talk I read Stuart Brown’s book ‘Play’, and he mentions that “our ability to play throughout life is the single most important factor in deterring our success and happiness”… Do you think as adults we tend to lose this (the act of play) and what’s three “playful” things you think we could adapt into our everyday life, that will make a positive impact to the way we feel and behave?

I inspired someone to read a book! That's excellent...I feel accomplished...perhaps I should read it too though?

Yes we have lost sight of how important play is - we are told our whole lives to "stop messing around", "grow up", "be professional". Our whole lives we are told to stop playing, it's ridiculous...a huge issue!

Three playful things to add to our lives...

#1 - Drop your ego - your ego doesn't allow you to be silly, make mistakes, laugh at yourself and be cool if others laugh at/with you.

#2 - "Oldest Trick in the Book" - when at your next meeting, or gym session, or whatever, tap a friend/colleague on one shoulder and you stand behind on the other side. They'll look around the wrong way. Great for a laugh and they'll usually try and get you back. Now you have a playful game in a dull environment.

#3 - Web search "Dad Jokes" and learn a new one every day. The right time to start using them will show itself to you over and over again. Trust me! 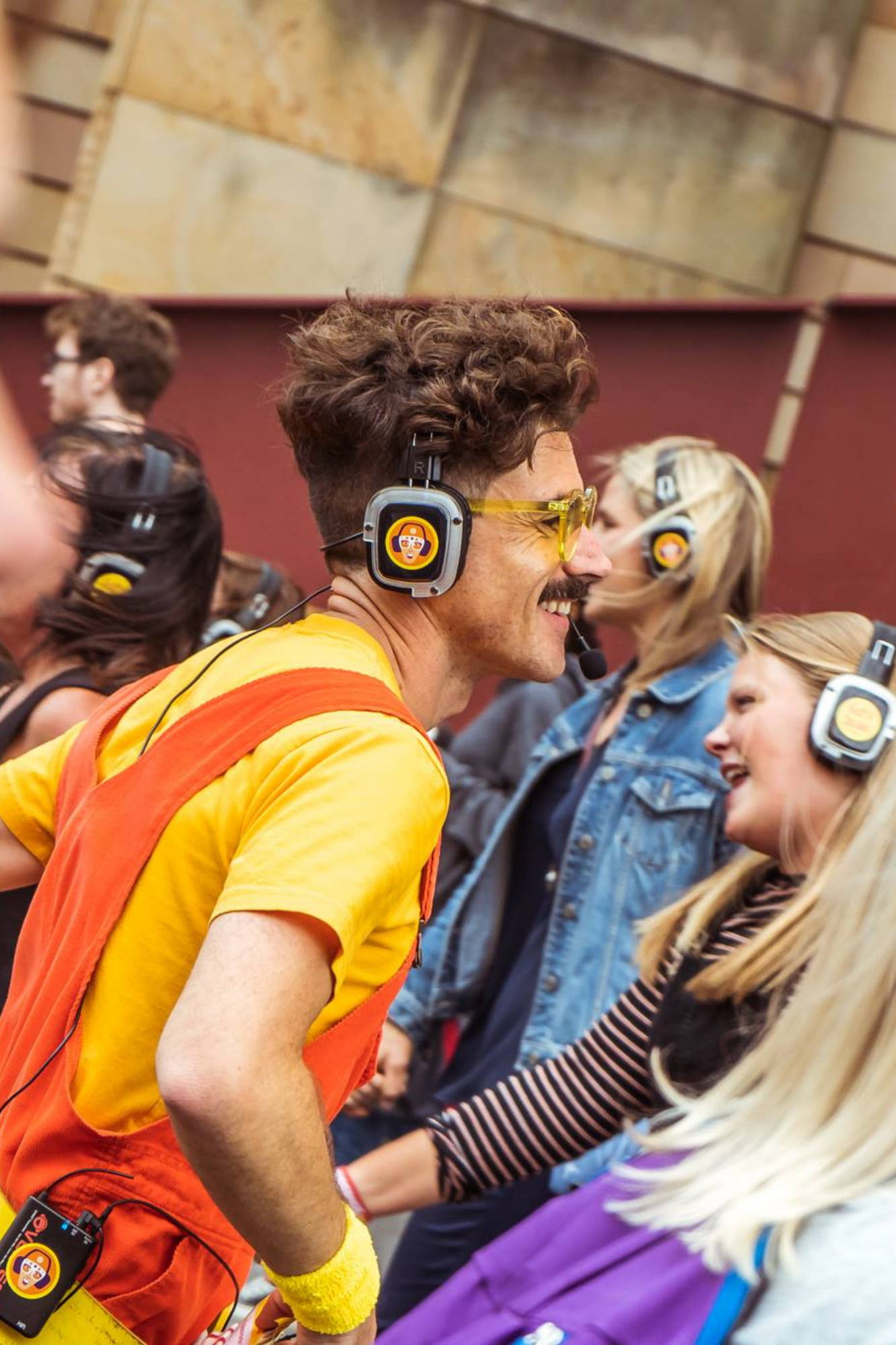 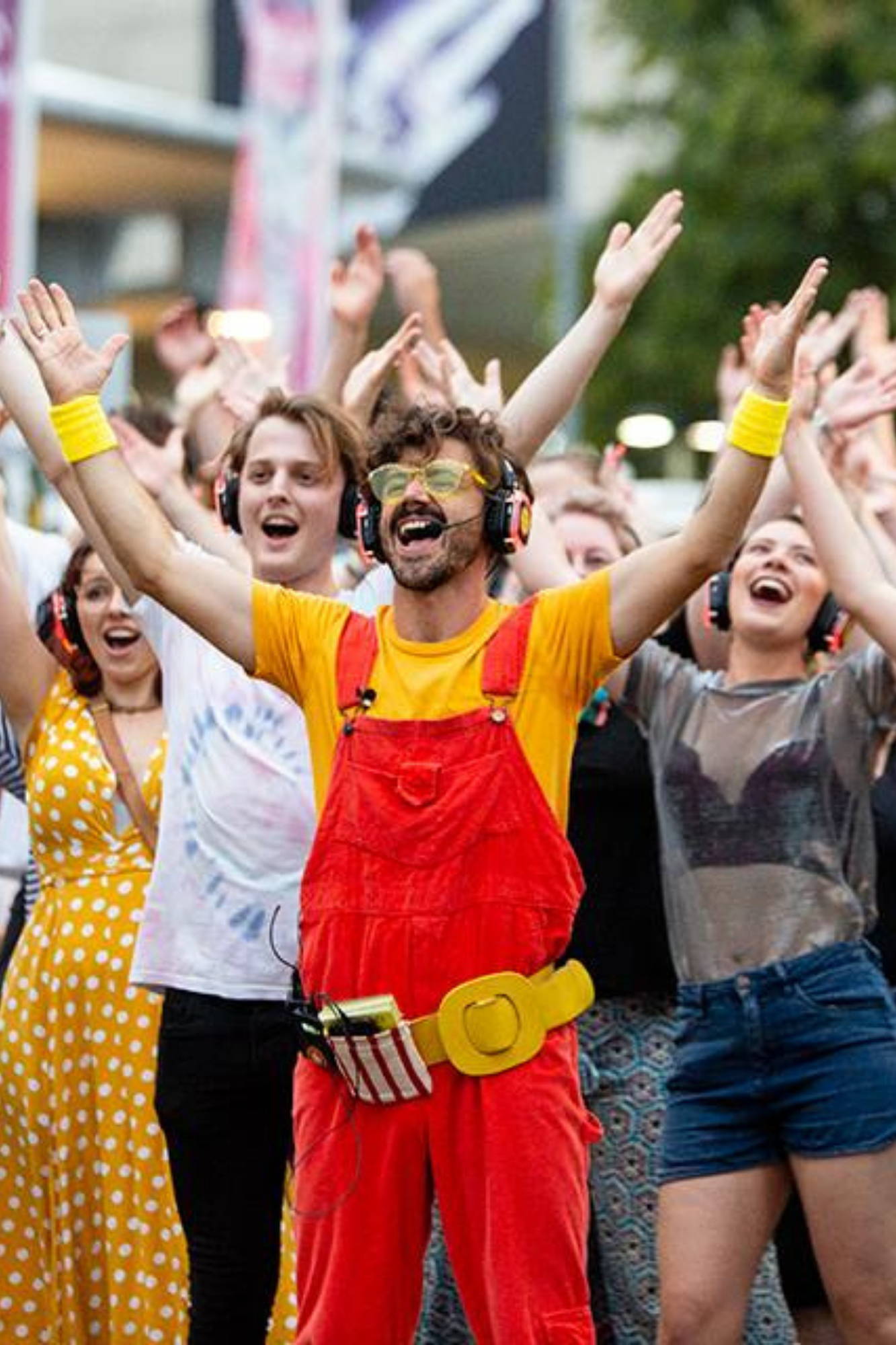 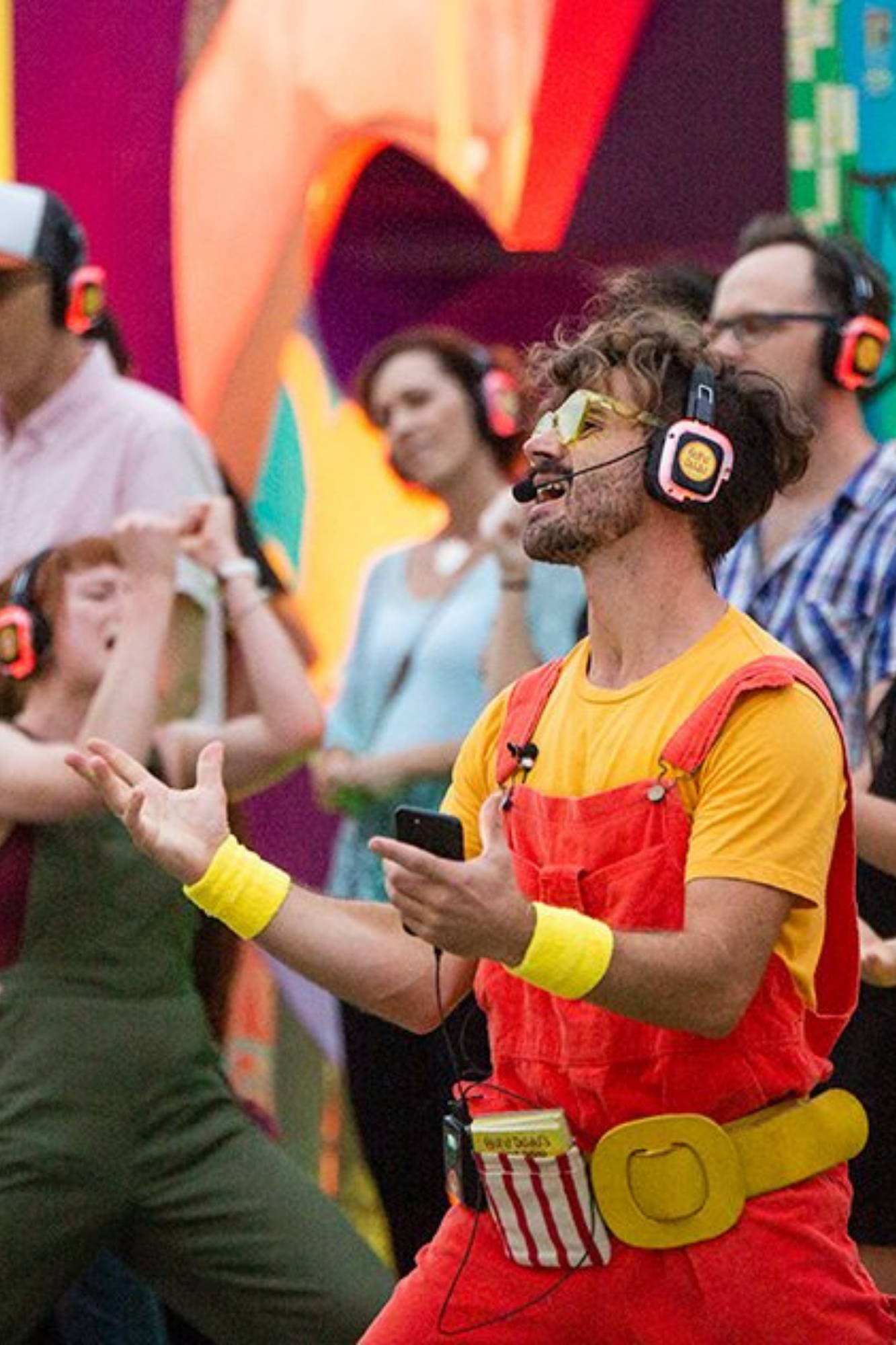 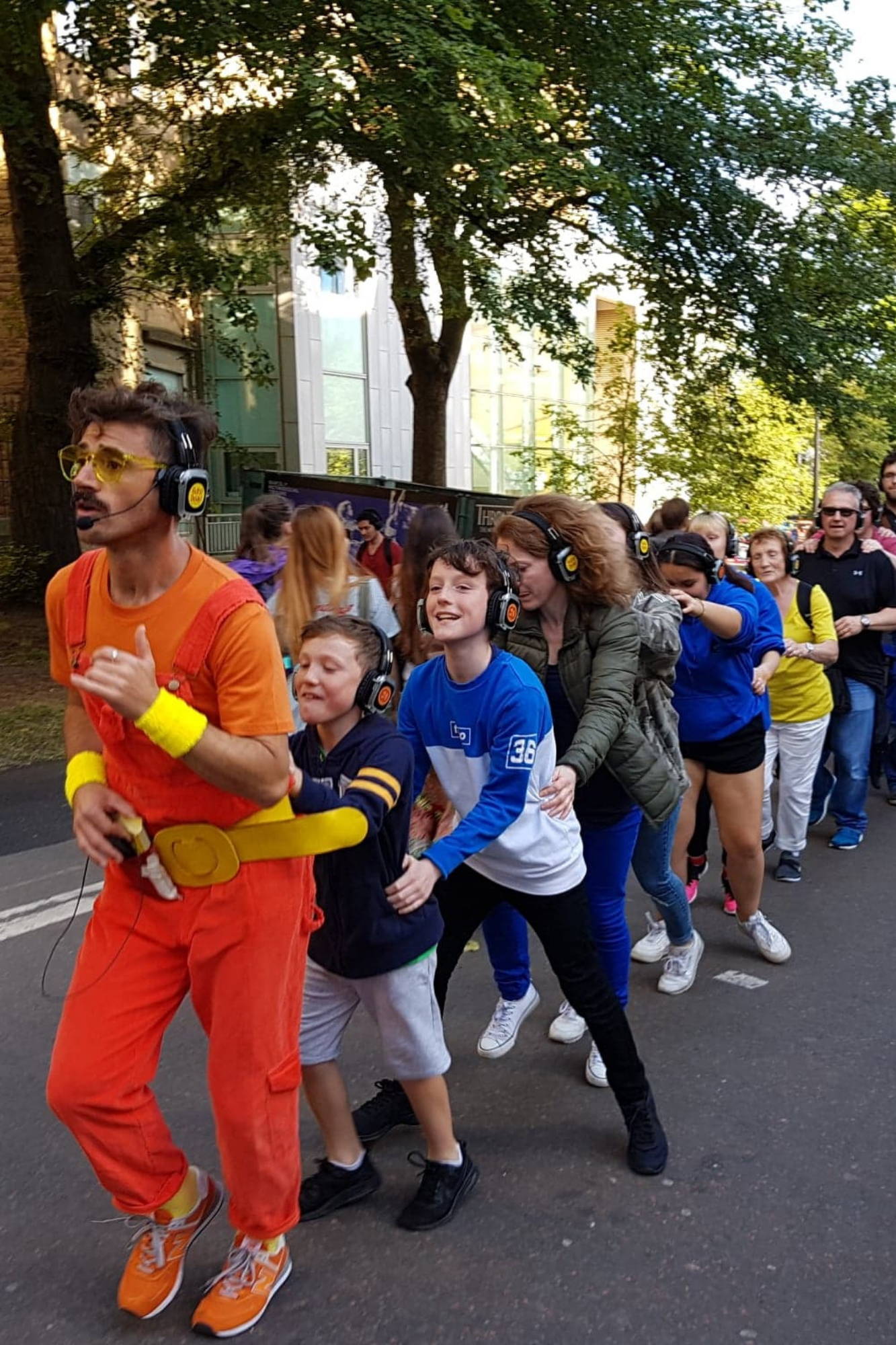 Another thing you’re involved in and host are Silent Disco Walking Tours. I LOVE them as they spread and promote happiness, well being and infectious laughter!. Is there anything planned in 2021 for them to resume?

Guru Dudu's Silent Disco Walking Tours had to take a break due to Covid. We are just starting to get a few inquiries come in, so we are starting to run the odd private tour, which means public tours will start up this year for sure, unless Covid throws another curveball. Best to keep updated on the website or follow Guru Dudu (your closest capital city) on facebook so you get notifications.

Our winter collection is called ‘Kindness’… How would you define kindness, or what’s your interpretation of kindness?

I think Kindness is about showing compassion for another. If you can drop whatever you have going on and really gauge what someone else might be going through, then you can meet them with kindness rather than hostility.

Is there a particular moment of kindness in your life - given, received or even observed - that stands out to you?

I had a good friend, Rachael, visit me on the GC from Blue Mountains about a year ago. The area I live in has quite a lot of homeless people. As we walked down the street one day Rachael saw a homeless man, stopped and asked him if he was hungry or needed anything. He was hungry and wanted a Subway roll full of salad. She bought him one, and then sat and spoke to him for a while. I did also of course but I was guided by her compassion and kindness. It didn't take much for her to do that, but it meant a lot to someone. I always felt I was compassionate to those less fortunate but that day she showed me another level altogether.

And lastly, what does it mean to live a big, beautiful life?

A big beautiful life needs love, laughter, community, passion, adventure, sorrow, heartache, excitement and all the bloody emotions and experiences available to us. It's about making decisions based on love even though fear might rear its ugly head from time to time. That's what I think....I could be wrong....it's happened before.

Since I interviewed Dani he has also started facilitating community dance classes on the Gold Coast with BRING A PLATE, an inclusive dance company founded in Brisbane. Check them out as what they’re doing in the community is great! Follow them: INSTAGRAM | FACEBOOK  | WEBSITE

Hopefully I’ll get to interview them for one of our Boom Blogs soon! 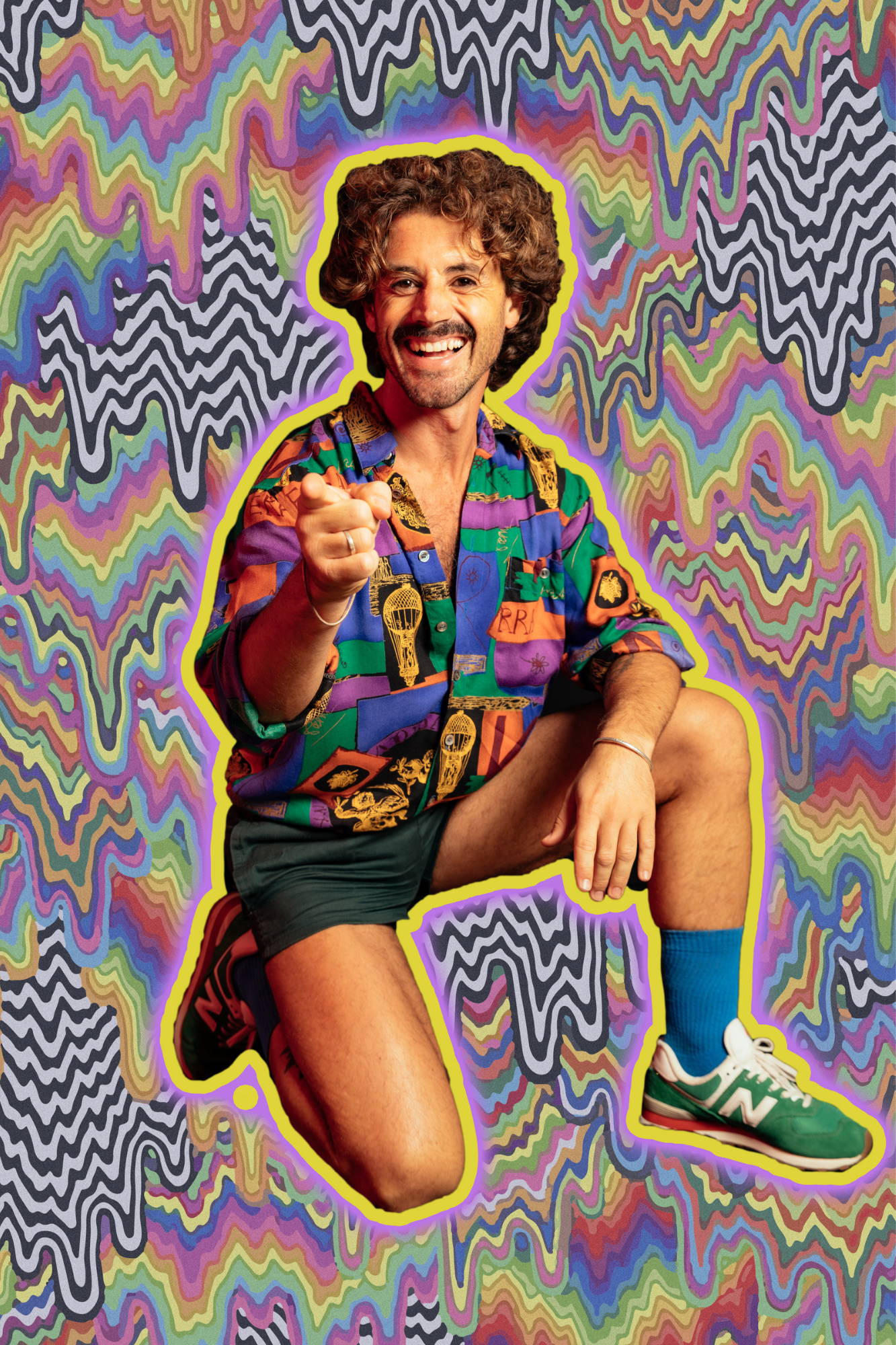 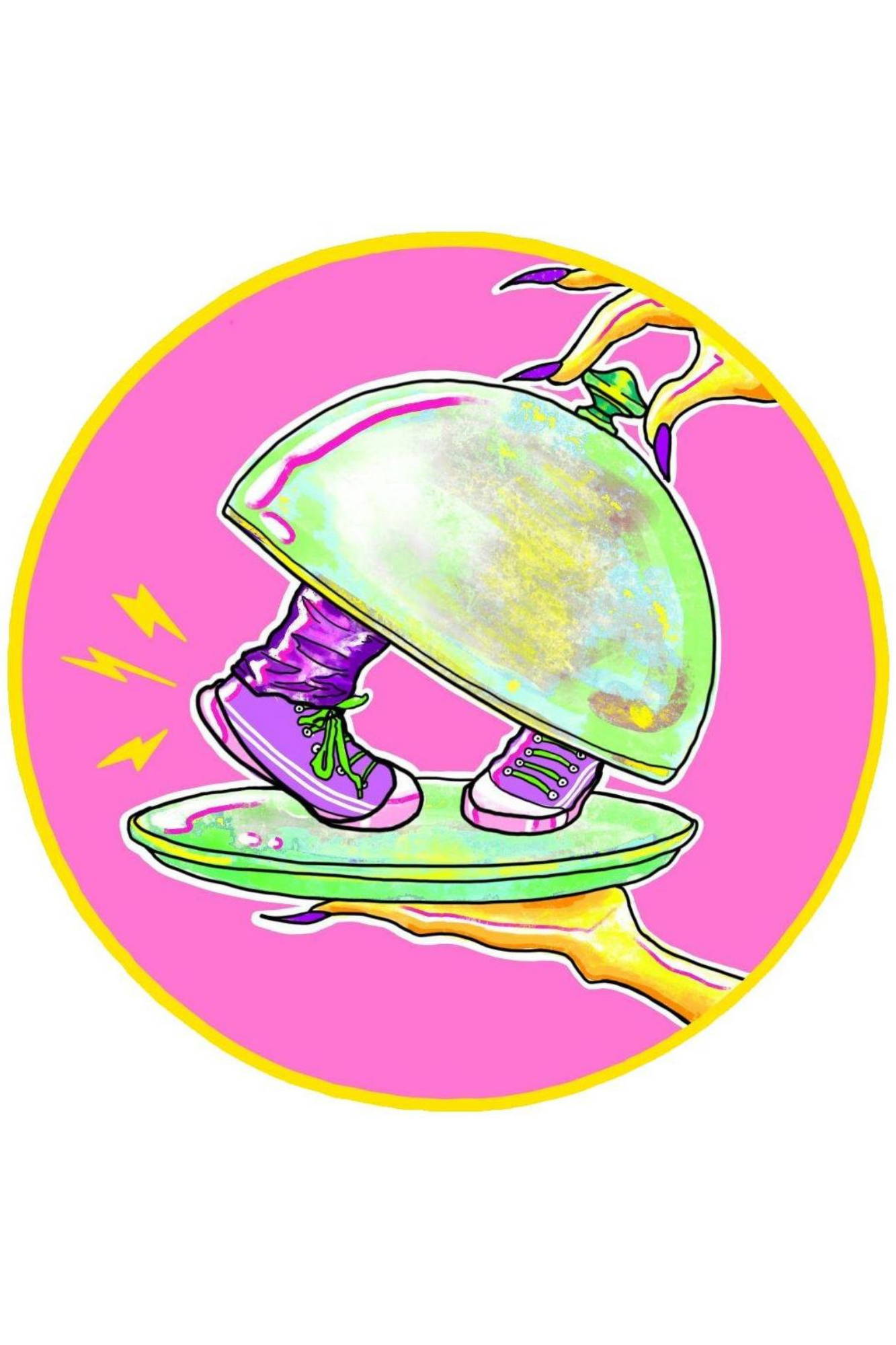 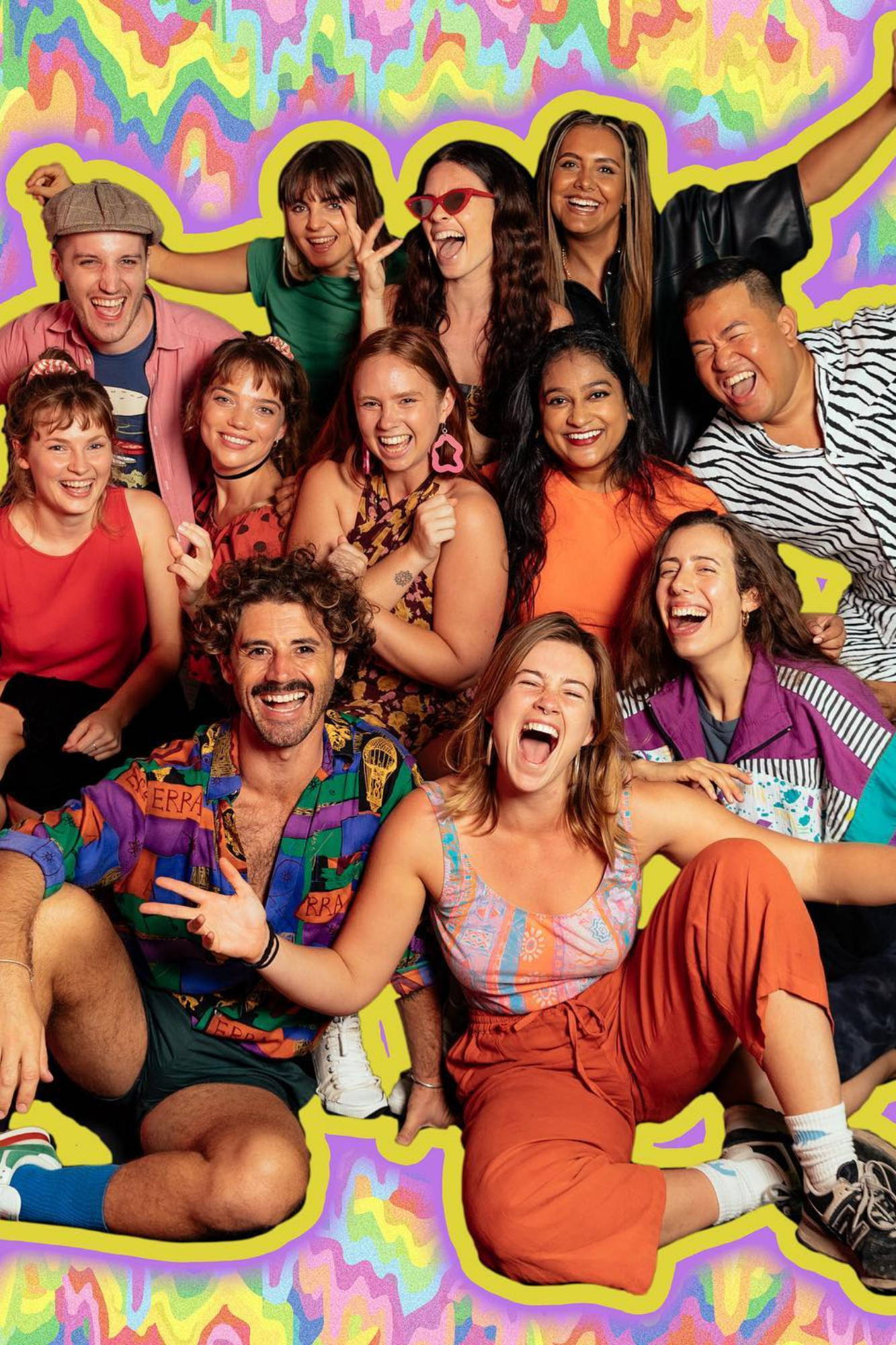 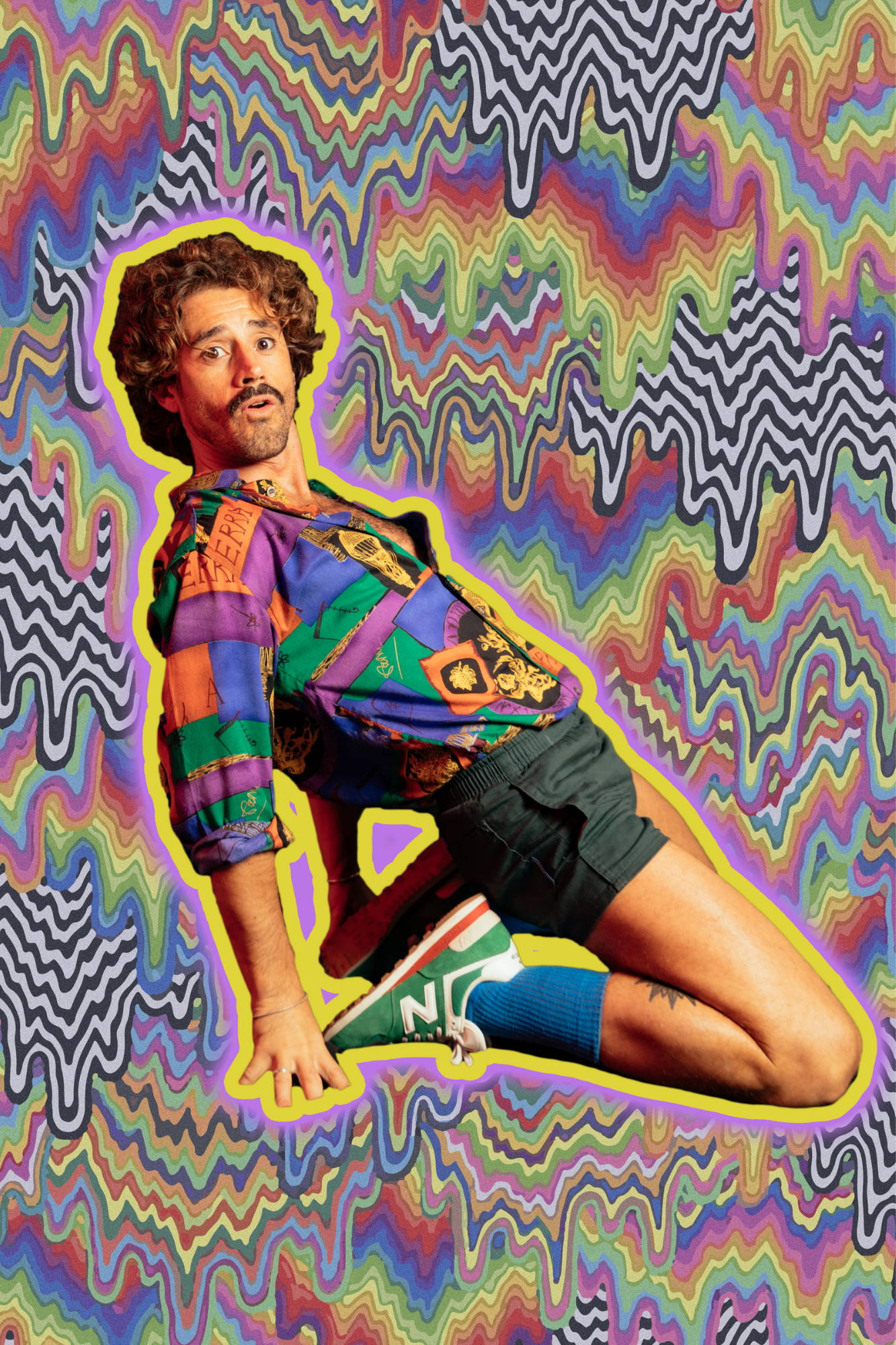