Looking good is something we take very seriously at the Boom Olympics, and sometimes more than the games themselves! From our competitors, to the spectators, and even the Olympics emcee, fashion always comes first. 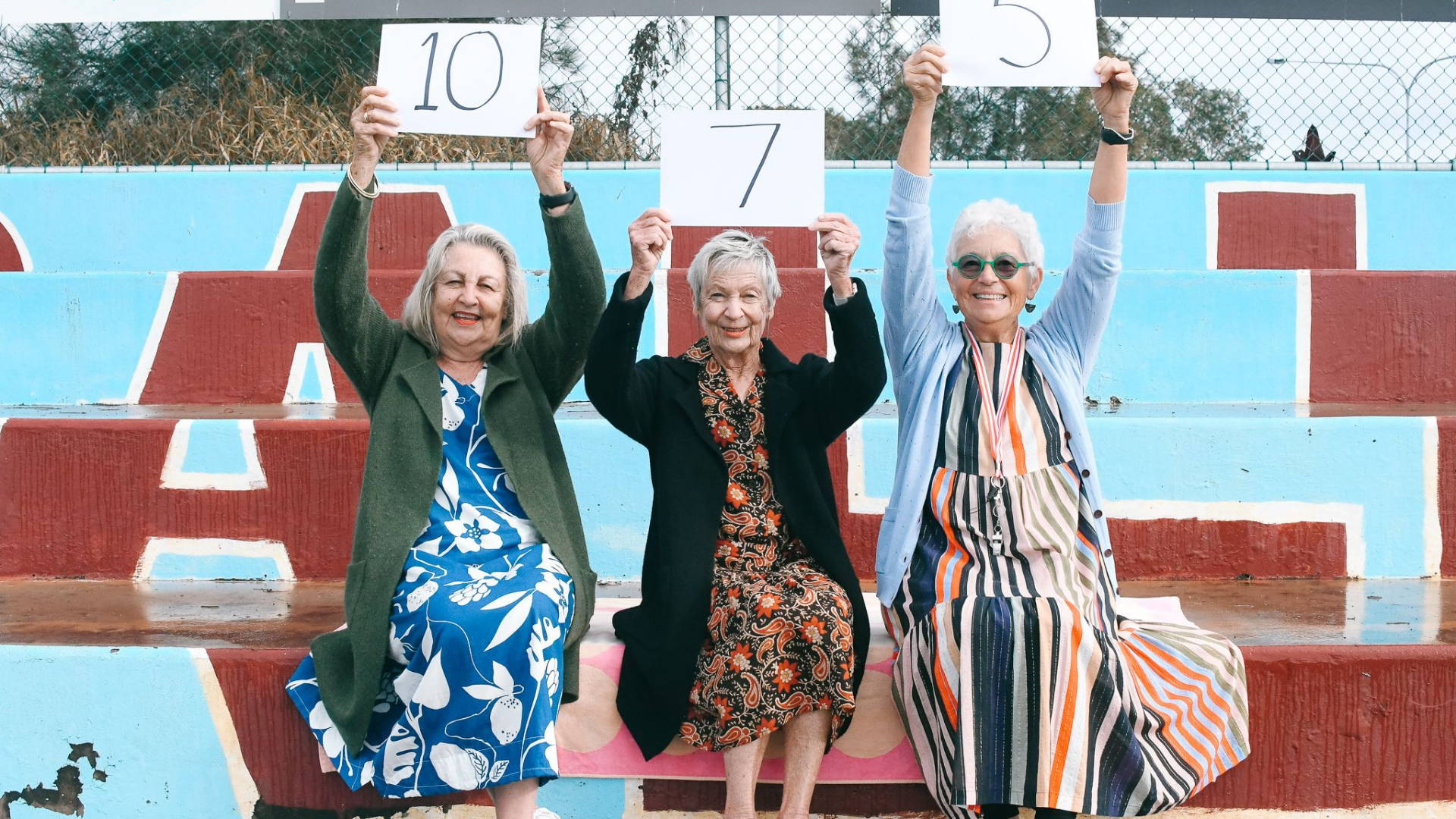 Our judges take judging very seriously. They’re known to be some of the toughest in the game, where no minor slip up will go past their acute eyes.

Pictured above... To the far left we have Judge Jan. She’s been in the judging game for many years now but previously was an olympian swimmer taking out 5 golds and 10 silvers within her professional career. Famously known as ‘Jaws’ with her 100m backstroke competitors, she would launch out of the water, filling the pool with fear, as she took out the gold every time. Now Judge Jan is enjoying the more relaxed life, but still a part of the Olympic world which she loves.

At this years Boom Olympics, Judge Jan will be seen on the bandstand in the  Islander Kala Dress and the cosy lambs wool Moss Dreams Coatigan - both items allow Jan’s arms to move freely with the scorecards.

In the centre we have Judge Jill. The ferocious ex shot-putter who was made to “hang up the boots” after allegations came out that she’d switched the shot-put with a coconut every time she stepped onto the field to compete. Judge Jill then retrained to become a Curler and astonished everyone with her Curling talent, especially being a newcomer with a slightly damaged Olympic career. Judge Jill went on to win 4 gold medals and 2 silvers for Curling, which she retired from in 2012 and went on to become a judge for the Olympics and other sporting events.

At this years Boom Olympics, Judge Jill will be seen on the bandstand in the Queens East Dress and Black Dreams Coatigan - looking stylish and funky, but never be mislead by her lovely smile. She's fierce.

To the far right we have Judge Mick. Known for her performance at the 2000 Sydney Olympics, that no words could ever explain, when Judge Mick took out gold for weightlifting and was from then on known as ‘The Hulk’. Judge Mick competed for years around the world at many Olympics, always taking out gold medal and surprising her opponents with her strength. After she retired from weightlifting Judge Mick opened ‘The School of Lifting Heavy Stuff’ and focused her energy into helping people learn how to lift things. She will always be remembered by her famous saying, “back up, stomach in, bend ya knees and use your legs”.

At this years Boom Olympics, Judge Mick will be seen on the bandstand in the Manhattan Queenie Dress and Lorell Cardigan in Sky - but don’t be fooled by the fun colours, Judge Mick is one of the toughest judges around. 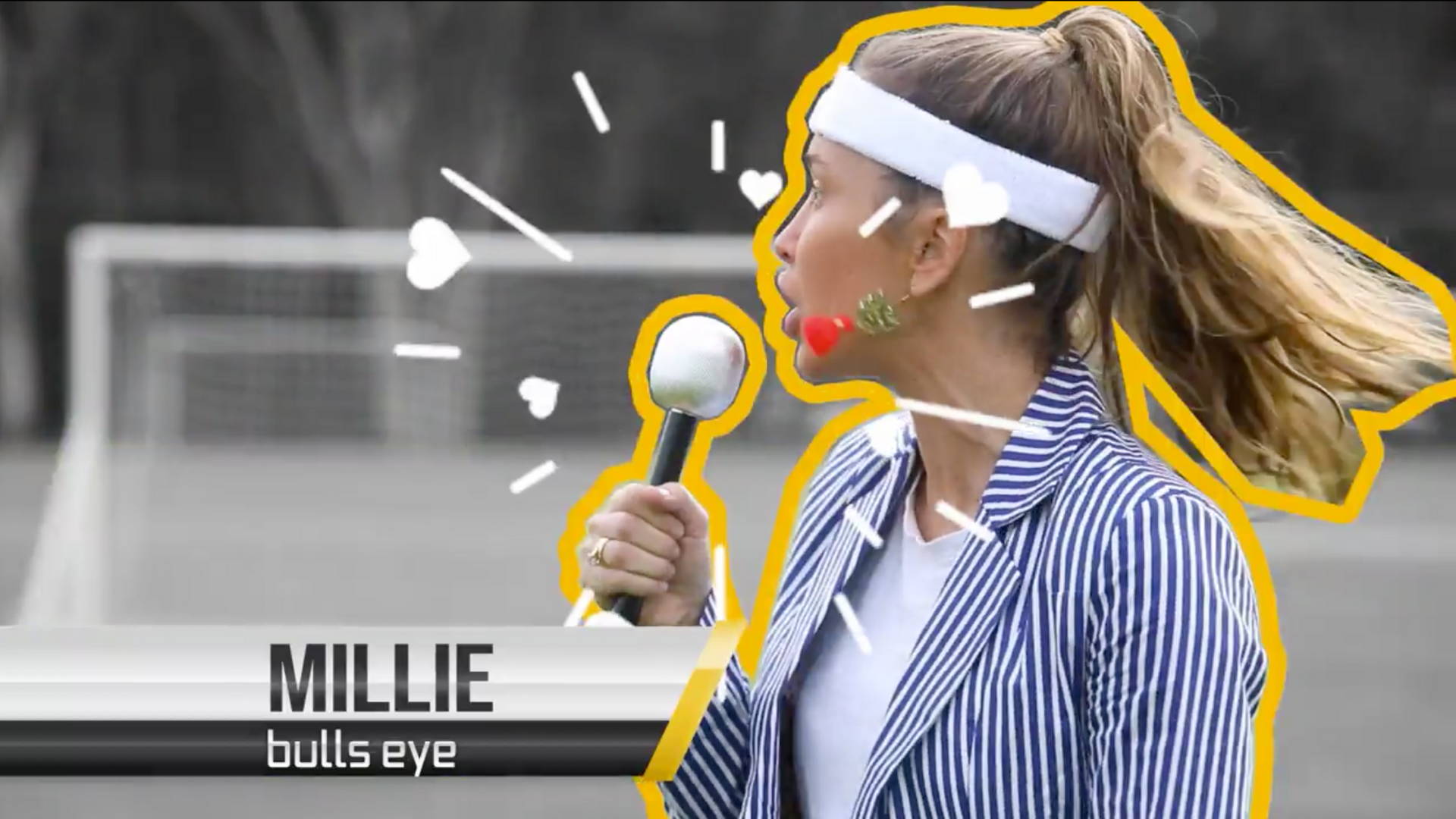 Millie, aka ‘The Bullseye’, is the emcee, referee, judge and umpire at this years Boom Olympics. She’s a familiar face in these areas after years of donning the microphone at different sporting events, where her enthusiasm doesn’t go unnoticed. Running alongside athletes, reporting in thick snow, getting sprayed with water by poolside and unfortunately (for her) being in the frontline which often results in accidents. Hence her nickname ‘The Bullseye’.

When Millie contemplates her outfit for each event, comfort and style are top on her list, as she never knows where she’ll end up or when she’ll have to strike. At this years Boom Olympics Millie will be seen wearing the tailored Empire Tribeca Jacket, and their matching Empire Tribeca Pants, with her own white top.

This outfit not only allows Mille to look great, but always be ready for action too. 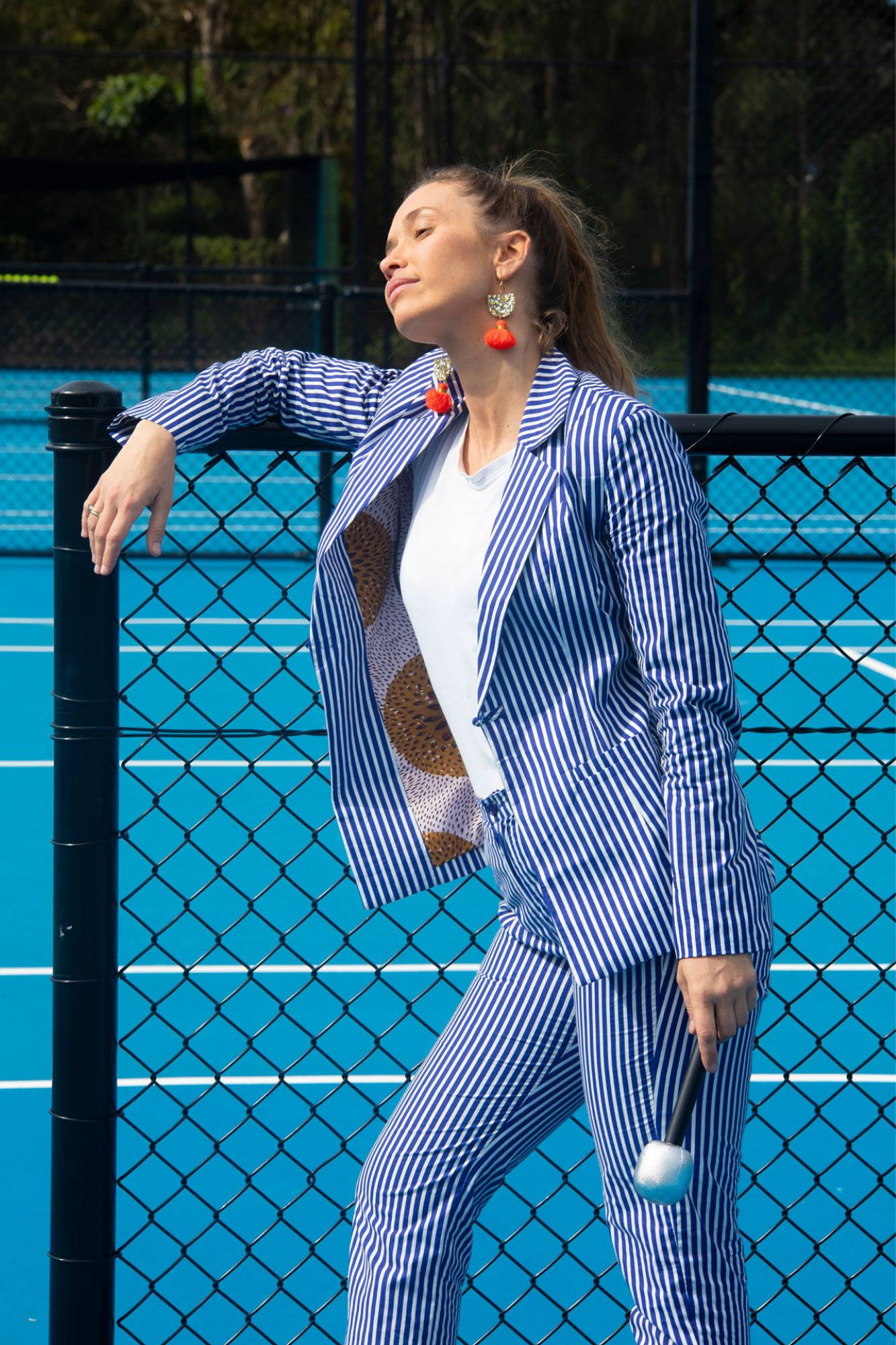 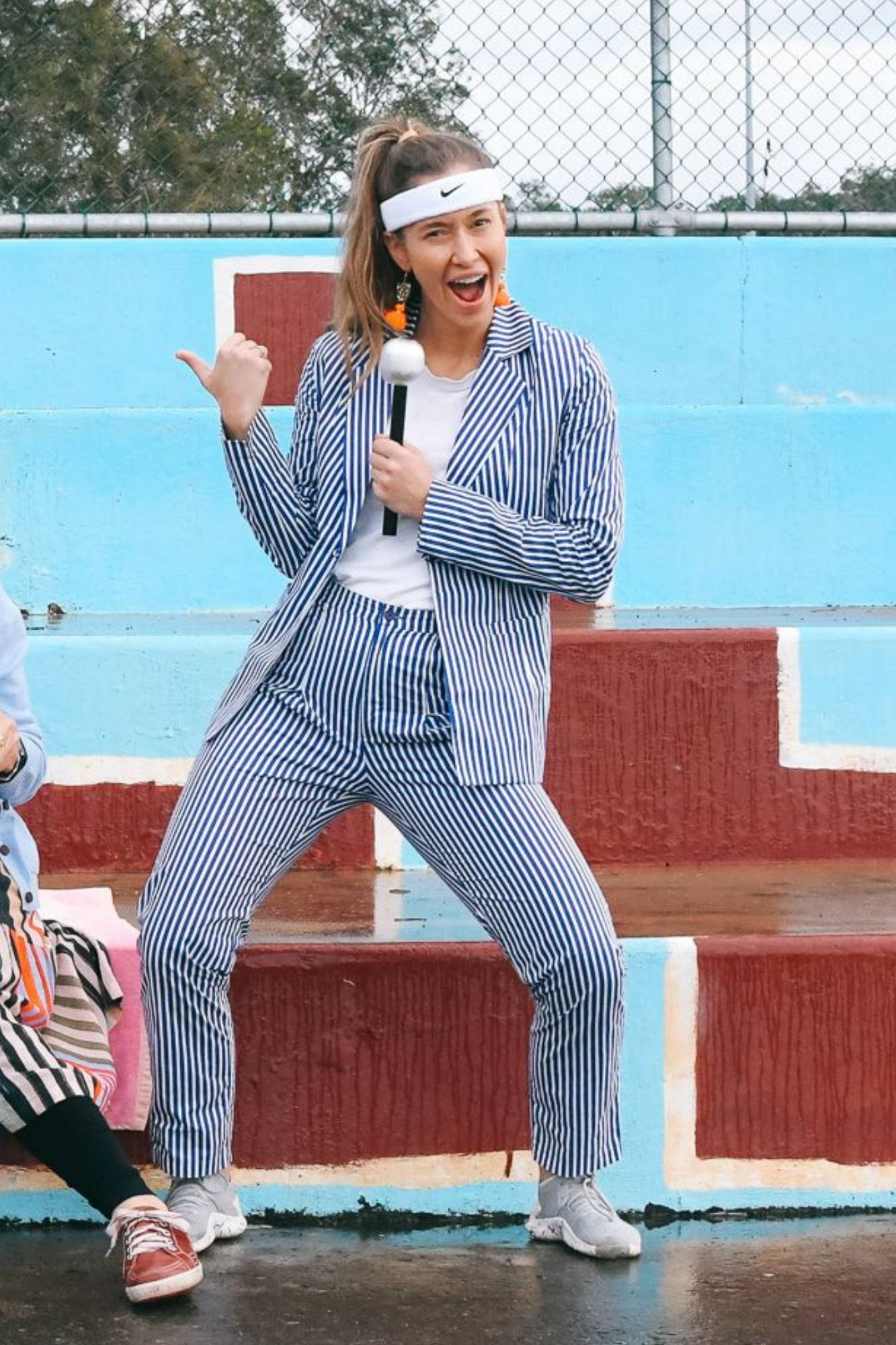 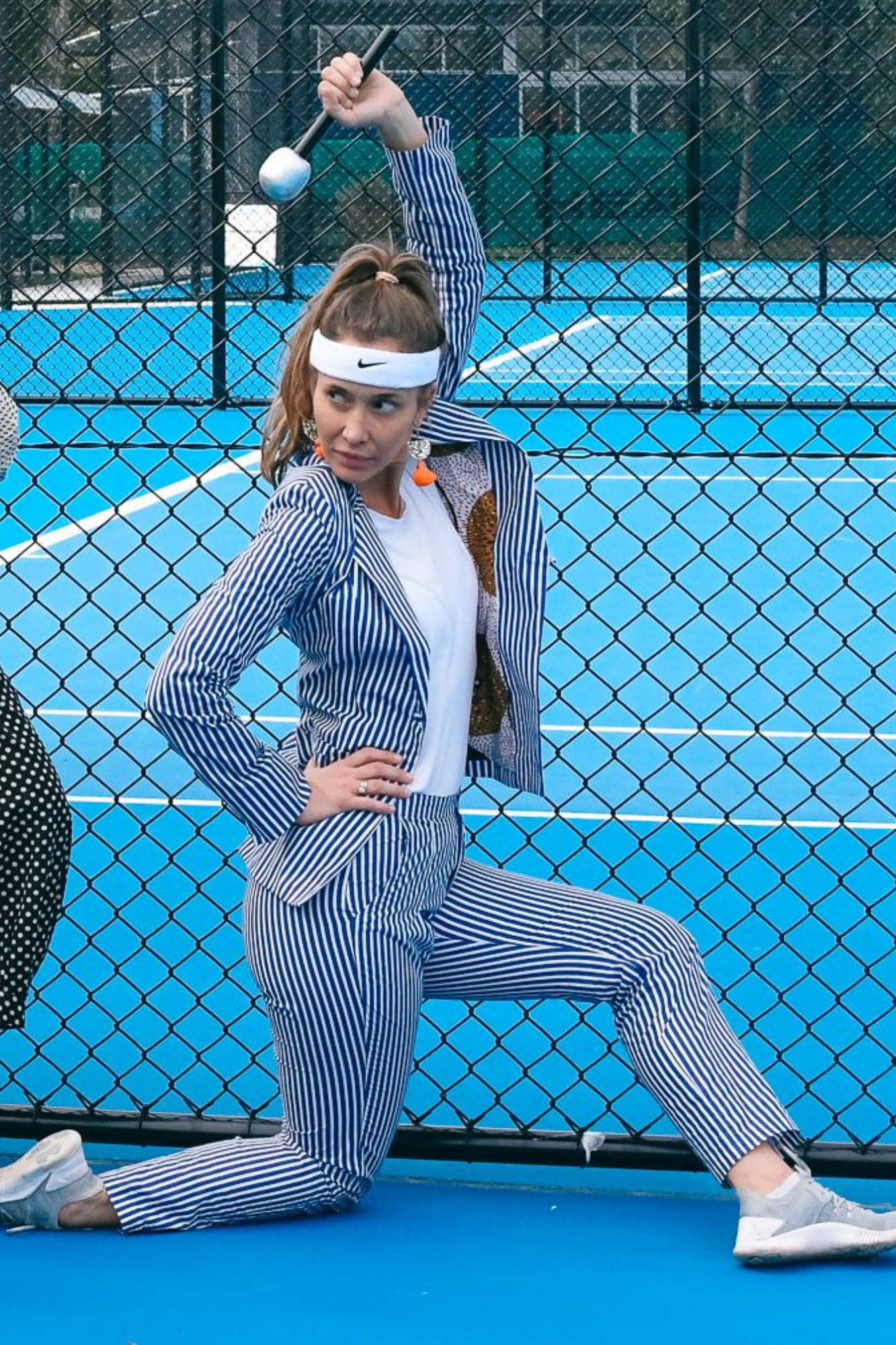 Stay tuned for Fashions on the Boom Olympics Fields Pt. 2...