It's that time of year again when India lights up, ready to celebrate the most important holiday of the year, Diwali.

Diwali is named after the row (avali) of clay lamps (deepa) that Indians light outside their homes to symbolise the inner light that protects them from spiritual darkness. The name is derived from the Sanskrit term dipavali, meaning “row of lights.”

Throughout the festival, small earthenware lamps filled with an oil called diyas, are lit and placed in rows along the parapets of temples and houses plus set afloat on rivers and streams. Homes are decorated, and floors inside and out are covered with rangoli, which is an art where elaborate patterns are created using materials such as powdered limestone, red ochre, dry rice flour, coloured sand, quartz powder, flower petals, and coloured rocks, coloured rice, sand, or flower petals. The doors and windows of houses are kept open in the hope that Lakshmi will find her way inside and bless the residents with wealth and success.

DIWALI IS CELEBRATED OVER FIVE DAYS. 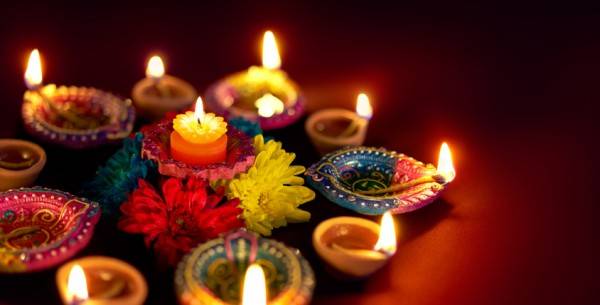 The first day is known as Dhanteras. People clean their homes and shop for gold or kitchen utensils to help bring good fortune. Lakshmi is the focus of worship on this day.

The second day is called Naraka Chaturdashi or Choti Diwali. People decorate their homes with clay lamps and create rangoli design patterns on the floor. This day commemorates Krishna’s destruction of Narakasura, and prayers are also offered for the souls of ancestors.

The third day is known as Lakshmi Puja, and it’s the main day of the Diwali festival. On this day families gather together for Lakshmi puja, a prayer to Goddess Lakshmi, to ensure their prosperity. They light diyas, candles, visit temples, have mouth-watering feasts and firework festivities.

The fourth day is called Goverdhan Puja, Balipratipada, or Annakut. This is the first day of Karttika, and the start of the new year in the Vikrama (Hindu) calendar when friends and relatives visit with gifts and best wishes for the season. It commemorates Krishna’s defeat of Indra, the king of the gods. Merchants perform religious ceremonies and open new account books.

The fifth day, called Bhai Dooj, Bhai Tika, or Bhai Bij, and celebrates the bond between brothers and sisters. On that day sisters pray for the success and well-being of their brothers, and the brothers visit their married sisters, who welcome them with love and a lavish meal.

CELEBRATIONS OF DIWALI DIFFER DEPENDING ON REGION AND TRADITION

Over the centuries, Diwali has become a national festival that's also enjoyed by non-Hindu communities.

The Hindus most widespread custom is the lighting of diyas on the night of the new moon to invite the presence of Lakshmi, the goddess of wealth.

In northern India, they celebrate the story of King Rama's return to Ayodhya after he defeated Ravana, the 10-headed king of the demons, by lighting rows of clay lamps.

In Bengal the goddess Kali is worshipped.

Southern India celebrates it as the day that Lord Krishna defeated the demon Narakasura. Some celebrate Diwali as a commemoration of the marriage of Lakshmi and Vishnu, while others acknowledge it as the birthday of Lakshmi.

In western India the festival marks the day that Lord Vishnu, the Preserver (one of the main gods of the Hindu trinity) sent the demon King Bali to rule the nether world.

In Jainism, Diwali marks the nirvana, or spiritual awakening, of Lord Mahavira on October 15, 527 B.C. The lighting of the lamps celebrates the light of Mahavira’s holy knowledge.

In Sikhism, it honours the day that Guru Hargobind, the Sixth Sikh Guru, was freed from captivity in Gwalior. Residents of Amritsar lit lamps throughout the city to celebrate the occasion.

Some Buddhists in India celebrate Diwali as well as a commemoration of the day when Emperor Ashoka converted to Buddhism in the 3rd century BCE.