Have a Chai with Dui

It’s Chai Time! That beautiful aromatic sweet drink that is integral to the rhythm of life in India.

That time in the day when you stop, take a moment, and either be with yourself, gossip with the neighbours, or have discussions about life and politics, with friends, new and old. Everything happens over a chai in India.

“Chai” is the Hindi word for “tea”, and it was derived from “cha”, which is the Chinese word for “tea”, although in Hindi the term chai means a mix of spices steeped into a tea-like beverage. Chai recipes vary across the continent of India, but the traditional ingredients of the spiced tea blend is usually black tea leaves mixed with spices, like cinnamon, cardamom, cloves, ginger and black peppercorns. It is brewed strong with milk, and always sweetened with sugar or honey.

The origin of chai dates back more than 5,000 years ago, when the ruling king of the time, ordered a recipe be created for a healing spiced beverage, for use in Ayurveda, a traditional medicinal practice in which herbs and spices are used for healing. The heat from ginger and black pepper was believed to stimulate digestion; the antiseptic properties in cloves were thought to help relieve pain; cardamom was used as a mood elevator; cinnamon supported circulation and respiratory function; and star anise was known to freshen the breath.

As the healing beverage spread across India, a wide variety of spices were used to prepare the drink, depending on the region of the continent, or even the neighbourhood, where the beverage was being made.

Believe it or not, original versions of Chai contained no actual tea leaves. Milk and sugar were also later additions to the famous drink.

The addition of black tea leaves, milk and sugar were popularized thousands of years later (in the mid-1800s) when the Camellia sinensis assamica tea plant variety was discovered in India and cultivated by the British, but it wasn’t until the 1930s that tea leaves were more commonly used in Chai though, as earlier prices were too high for people to afford.

Today Chai tea stalls are a common sight throughout India, and all with their own Chai recipe. But perhaps the strongest association with Indian Chai is the familiar chant of Chai Wallahs. “ garam chai garam chai” (hot tea) as they weave their way along trains bursting to the seams and equally crowded streets.

Now, let’s get down to business and make some Chai….

Fill the bottom of a saucepan (size will depend on how many you have coming over for chai) with water, so let’s say about 1cm high from the bottom. Place it on the stove on a high heat to bring to a boil.

Add a pinch of tea leaves per person (make it a good size pinch!) and let the water and leaves boil.

Meanwhile, place a few cardamon pods, cloves and some aniseed in a mortar and pestle, give them a bash, and add them to the boiling tea along with a cinnamon quill (Dui has used half a stick for 4 people so it’s not to strong)

Continue to boil the tea…

Next up, get a good chunk of ginger, the size your tastebuds choose, and give it a bash in the mortar and pestle leaving the skin on. Unless you want to peel it, but Dui isn’t too fussy with that. It’s all flavor! Now add the ginger to your pot of boiling deliciousness.

Now it’s time to sweeten things up! Dui is using coconut sugar in her chai, but otherwise normal sugar or honey can be used too. In India, they love things sweet, so it’s usually one spoon per person, plus one for the pot!

Next is the milk, or a milk alternative. Back in India they would get the milk fresh from their cows, as it’s common for most households to have a cow in India. Here, we have so many choices of milk and alternatives, it’s sometimes hard to keep up. Today Dui has chosen oat milk and she just guesses the amount to pour in, but I’d say one cup per person if you’re the measurement type.

The chai should now be boiling nicely, your home should be smelling wonderfully, and your chai will nearly be ready to share, just one last step. Typically in India they will allow the chai to boil, rise up, and then they’ll take it off the heat to allow it to come back down. Then repeat that process 3 times. Some may say the milk is burning when that happens, but don’t listen to them, it’s just the chai way!!

Your chai will now be ready and perfect for drinking… Boom Shankar! 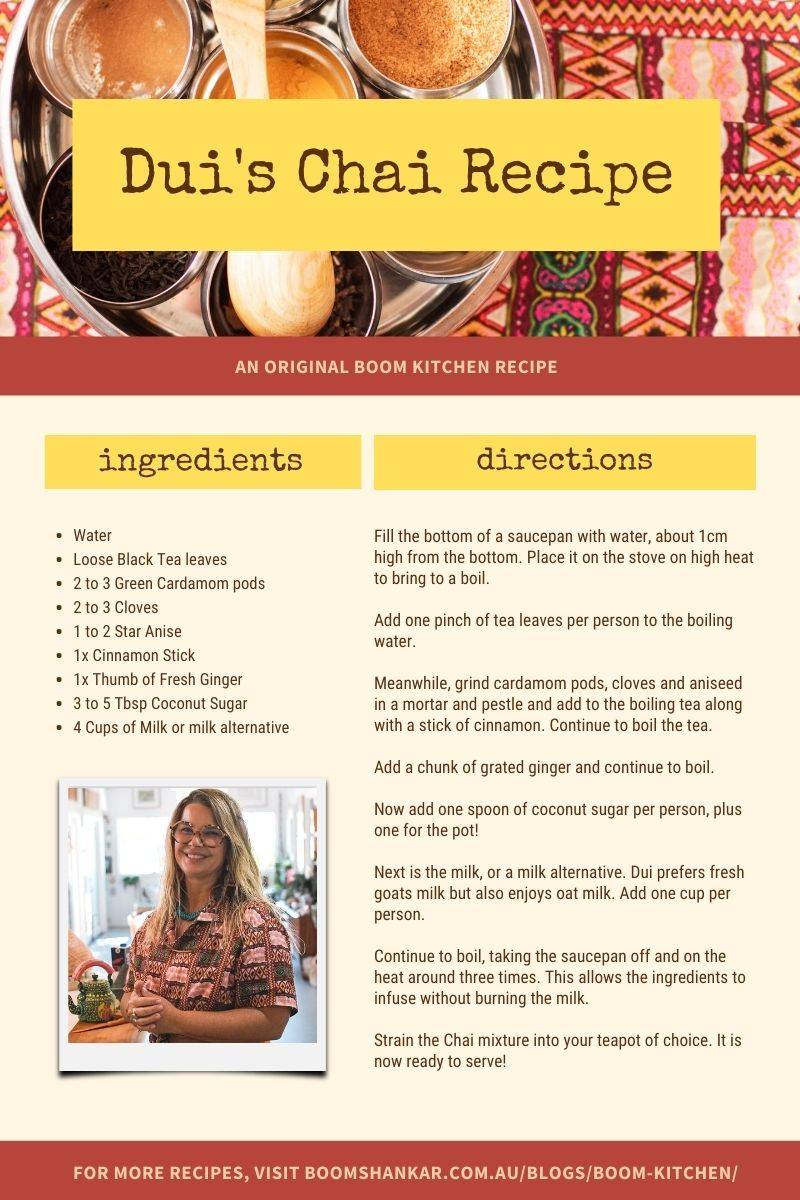